Three individuals X, Y, Z hired a car on a sharing basis and paid Rs. 1,040. They used it for 7, 8, 11 hours, respectively. What are the charges paid by Y?
Mathematical-Reasoning       Partnership
Question 30 Explanation: 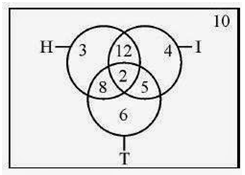 How many persons would be reading at least two newspapers?
Logical-Reasoning       Venn-Diagram
Question 35 Explanation:
Persons reading atleast two papers is 8 + 12 + 5 + 2 = 27
Questions from 35 - 36 are based on the following diagram in which there are three intersecting circles. H representing The Hindu, I representing Indian Express and T representing The Times of India. A total of 50 persons were surveyed and the number in the Venn diagram indicates the number of persons reading the newspapers.

How many persons would be reading almost two newspapers?
Logical-Reasoning       Venn-Diagram
Question 36 Explanation:
Almost two papers 8 + 12 + 5 - 2 = 23
Which of the following graphs does not represent regular (periodic) behaviour of the variable f(t)? 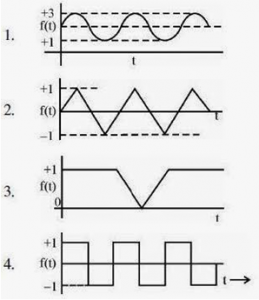 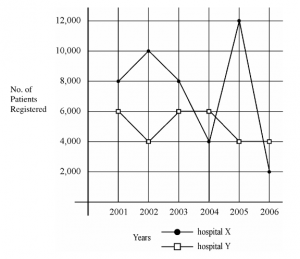