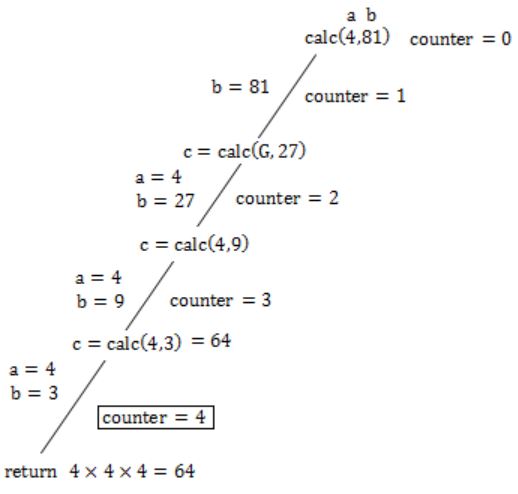 The output of this program is

The output of the program above is

Programming       Programming       GATE 2018       Video-Explanation
Question 3 Explanation:
The first call to the function ‘func1(str1, str2);’ is call by value.
Hence, any change in the formal parameters are NOT reflected in actual parameters.
Hence, str1 points at “hi” and str2 points at “bye”.
The second call to the function ‘func2(&str1, &str2);’ is call by reference.
Hence, any change in formal parameters are reflected in actual parameters.
Hence, str1 now points at “bye” and str2 points at “hi”.
Hence answer is “hi bye bye hi”.

Consider the following program written in pseudo-code. Assume that x and y are integers.

The code suffers from which one of the following problems:

Programming       Programming       GATE 2017 [Set-1]       Video-Explanation
Question 6 Explanation:
Option A:
In C++, we need to perform type casting, but in C Implicit type casting is done automatically, so there is no compile time error, it prints10 as output.
Option B:
NULL means address 0, if (a == 0) or (0 == a) no problem, though we can neglect this, as it prints 10.
Option C:
x points to a valid memory location. Dangling Pointer means if it points to a memory location which is freed/ deleted.
int*ptr = (int*)malloc(sizeof(int));
free(ptr); //ptr becomes a dangling pointer
ptr = NULL; //Removing Dangling pointers condition
Option D:
x is assigned to some memory location
int*x = malloc(sizeof(int));
→ (int*)malloc(sizeof(int)) again assigns some other location to x, previous memory location is lost because no new reference to that location, resulting in Memory Leak.
Hence, Option D.

The output printed when fun1(5) is called is 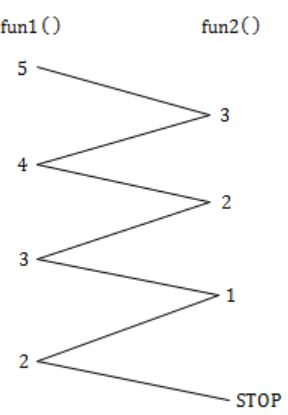 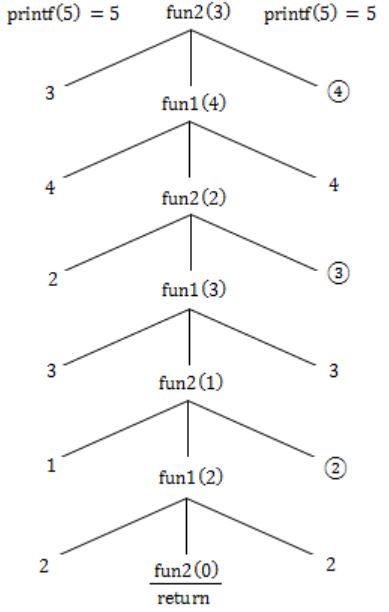 Consider the C functions foo and bar given below:

Invocations of foo(3) and bar(3) will result in:

Programming       Programming       GATE 2017 [Set-1]       Video-Explanation
Question 8 Explanation:
while(val>0)
{
x = x + foo(val–);
}
In this case foo(val–) is same as foo(val) & val– ;
Because the recursive function call is made without changing the passing argument and there is no Base condition which can stop it.
It goes on calling with the same value ‘val’ & the system will run out of memory and hits the segmentation fault or will be terminated abnormally.
The loop will not make any difference here.
while(val>0)
{
x = x + bar(val-1);
}
bar(3) calls bar(2)
bar(2) calls bar(1)
bar(1) calls bar(0) ⇾ Here bar(0) will return 0.
bar(1) calls bar(0)
bar(1) calls bar(0)……..
This will continue.
Here is a problem of infinite loop but not abrupt termination.
Some compilers will forcefully preempt the execution.

Recall that strlen is defined in string.h as returning a value of type size_t, which is an unsigned int. The output of the program is _________. 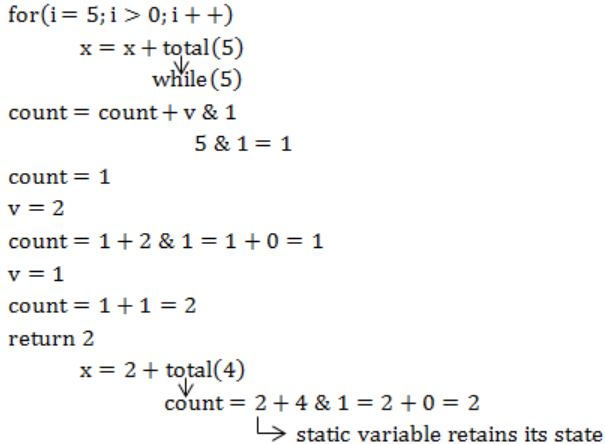 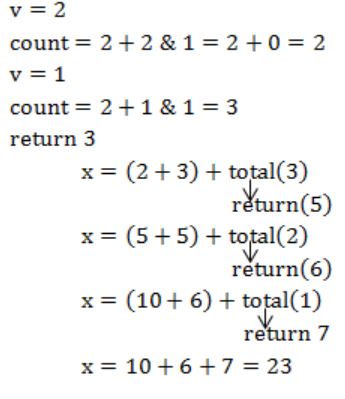 The output of invoking printxy(1, 1) is 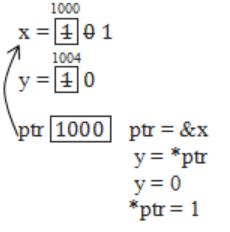 Consider the C program fragment below which is meant to divide x and y using repeated subtractions. The variables x, y, q and r are all unsigned int.

Which of the following conditions on the variables x, y, q and r before the execution of the fragment will ensure that the loop terminates in a state satisfying the condition x == (y*q + r)?

Consider the following snippet of a C program. Assume that swap(&x, &y)  exchanges the contents of x and y. 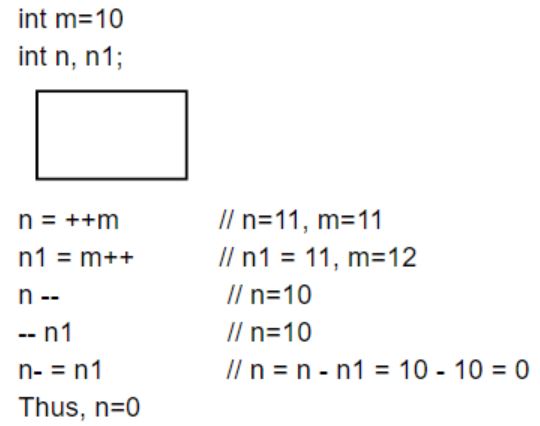 Which one of the following expressions, when placed in the blank above, will NOT result in a type checking error? 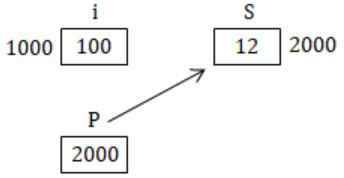 The missing loop condition is

What will be the output of the following C program?

What will be the output of the following pseudo-code when parameters are passed by reference and dynamic scoping is assumed? 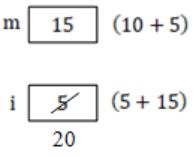 Which one of the following conditions is TRUE before every iteration of the loop?

Note: max(x,y) returns the maximum of x and y.

What is the output of the following C code? Assume that the address of x is 2000 (in decimal) and an integer requires four bytes of memory.

Consider the following pseudo code, where x and y are positive integers.

Which one of the following most closely approximates the return value of the function fun1?

The output of the above function on input “ABCD EFGH” is 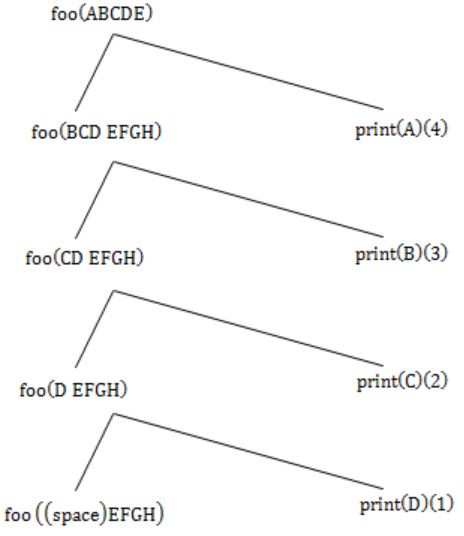 if condition fails
& returns controls
∴ DCBA will be pointed

Consider the C program below.

What will be printed by the program?

Consider the following recursive C function. If get(6) function is being called in main() then how many times will the get() function be invoked before returning to the main()? 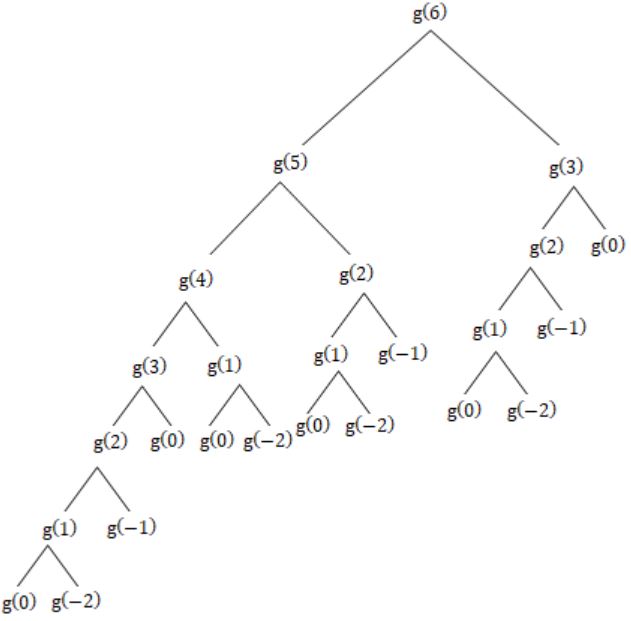 Which one of the following statements is TRUE?

Consider the function func shown below:

Suppose n and p are unsigned int variables in a C program. We wish to set p to nC3. If n is large, which one of the following statements is most likely to set p  correctly?

Consider the C function given below.

Which one of the following is TRUE?

Let A be a square matrix of size n x n. Consider the following program. What is the expected output?

be a small matrix.
For first row iteration, it get swapped and becomes

For second row iteration, it comes to the original position

Which one of the following statements is FALSE?

The procedure is tested with the following four test cases

If array A is made to hold the string “abcde”, which of the above four sest cases will be successful in exposing the flaw in this procedure?

What will be the output of the following C program segment?

Programming       C-Programming       GATE 2012
Question 48 Explanation:
Everything in the switch will be executed, because there is no break; statement after case ‘A’. So it executes all the subsequent statements until it find a break;
So,
→ Choice A
→ Choice B. No choice. Is the output.

What output will be generated by the given code segment? 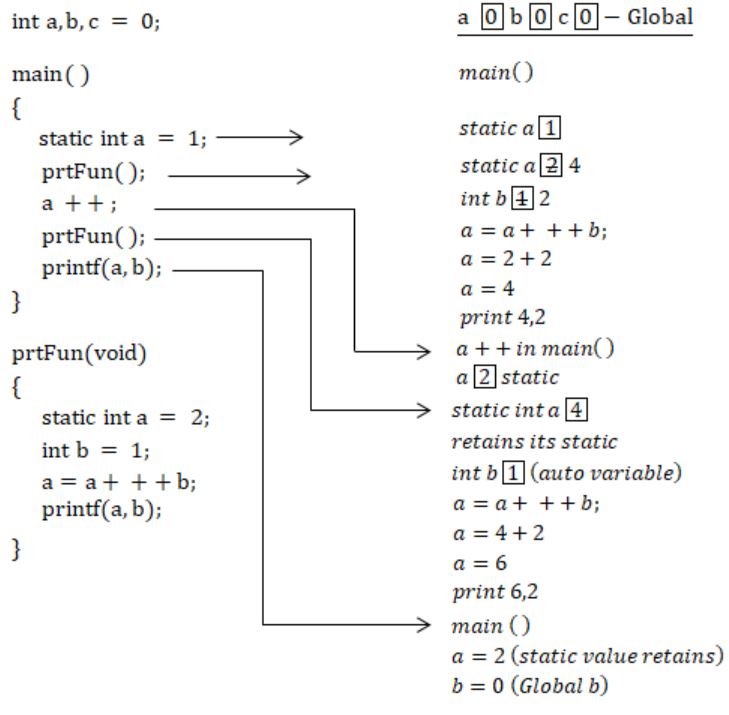 What output will be generated by the given code segment if: