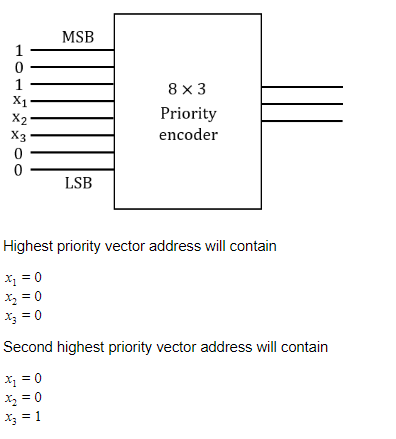 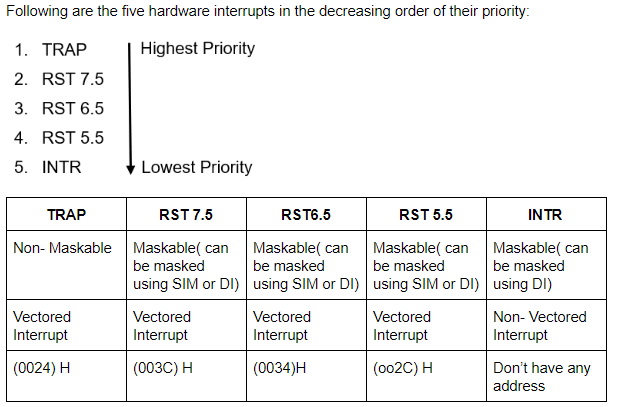 DI(Disable Interrupt): DI allows the microprocessor to reject the interrupt. In DI the interrupts are disabled immediately and no flags are affected.
SIM(Set Instruction Mask): It uses flags to disable the interrupts. Here “1” indicated that the interrupt is masked and “0” indicates the the instruction is not masked.
A dynamic RAM has refresh cycle of 32 times per msec. Each refresh operation requires 100 nsec and a memory cycle requires 250 nsec. What percentage of memory’s total operating time is required for refreshes?
Digital-Logic-Design       RAM
Question 4 Explanation: 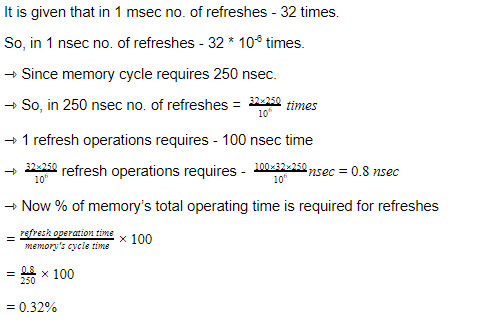 A DMA controller transfers 32-bit words to memory using cycle stealing. The words are assembled from a device that transmits characters at a rate of 4800 characters per second. The CPU is fetching and executing instructions at an average rate of one million instructions per second. By how much will the CPU be slowed down because of the DMA transfer?
Computer-Organization       DMA
Question 5 Explanation:
→ In one second, device is sending - 4800 characters to DMA
→ 1 character = 8 bits
→ So in one second, device is sending - (4800⨯8) bits to DMA
→ In one cycle, DMA sends - 32 bits.
→ To send (4800 ⨯ 8) bits DMA needs = (4800⨯8)/30 cycles = 1200 cycles
→ Now in one second CPU executes 106 instructions.
→ But because of cycle stealing, CPU has slow down and the % by which CPU gets slow down can be calculated as
= 1200/106 * 100
= 12/10000 * 100
=0.12%
A CPU handles interrupt by executing interrupt service subroutine __________.
Computer-Organization       Interrupt-Service-Routing
Question 6 Explanation:
CPU after completing the execution of a instruction checks the status of interrupt if there is a interrupt then CPU executes the interrupt service routine to service it else CPU stats executing next instruction.
Given the following set of prolog clauses :
father(X, Y) :
parent(X, Y),
male(X),
parent(Sally, Bob),
parent(Jim, Bob),
parent(Alice, Jane),
parent(Thomas, Jane),
male(Bob),
male(Jim),
female(Salley),
female(Alice).
How many atoms are matched to the variable ‘X’ before the query father(X, Jane) reports a Result ?
Artificial-intelligence       Prolog
Question 7 Explanation:
Excluded for evaluation
Forward chaining systems are __________ where as backward chaining systems are __________.
Artificial-intelligence       backward chaining
Question 8 Explanation:
Forward Chaining: Forward chaining starts with the available data and uses inference rules to extract more data until a conclusion is reached.
It is also known as data driven inference technique.
It is bottom up reasoning.
It is a breadth first search.
For Example: “If it is raining then i will bring the umbrella”. Here “it is raining” is a available data from which more data is extracted and a conclusion “i will bring the umbrella” is drived.
Backward Chaining: Backward chaining is an inference method described colloquially as working backward from the goal.
It is also known as goal driven inference technique.
Here we starts from a goal and apply inference rules to get some data.
It is top down reasoning.
It is a depth first search.
For Example: “If it is raining then i will bring the umbrella”. Here our conclusion is “i will bring the umbrella”. Now If I am bringing an umbrella then it can be stated that it is raining that is why I am bringing the umbrella. So here “ It is raining” is the data obtained from goal . Hence it was derived in a backward direction so it is the process of backward chaining.

In electronic mail, which of the following protocols allows the transfer of multimedia messages?
Computer-Networks       Application-Layer-Protocol
Question 14 Explanation:
SMTP(Simple Mail Transfer Protocol) is used to send mail containing text, voice, video, to MTA of destination.
MIME(Multimedia Internet Mail Extension) is not a mail protocol. It is used to send mails containing ASCII and Non-ASCII files.
It is an extension of SMTP but not a mail protocol.
POP3(Post Office Protocol) is a client server architecture used to download message from MTA to workstation for offline use.
IMAP(Internet Message Access Protocol) is a client server architecture used to check messages without downloading from MTA.
A device is sending out data at the rate of 2000 bps. How long does it take to send a file of 1,00,000 characters ?
Computer-Networks       Bit-rate
Question 15 Explanation:
Explanation: 1 character ------- 8-bits
1,00,000 character ---------- 8,00,000 bits
2000 bits--------- 1 second
1 bit ---------- 1/2000 seconds
8,00,000 bits ---------(1/2000)* 8,00,000
= 400 seconds 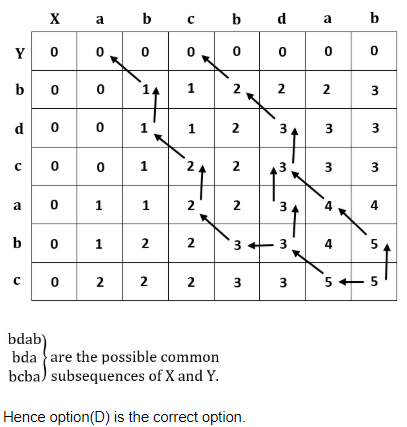 If there are n integers to sort, each integer has d digits and each digit is in the set {1, 2, ..., k}, radix sort can sort the numbers in :
Algorithms       Sorting
Question 18 Explanation:
The radix sort running time depends on the stable sort used as the intermediate sorting algorithm. When each digit is in the range 0 to k-1(It takes k possible values), and ‘k’ is not too large, counting sort is the obvious choice. Each pass over n d-digits numbers then takes time O(n+k). There are ‘d’ passes, and so total time for radix sort is O(d (n + k))
There are 18 questions to complete.